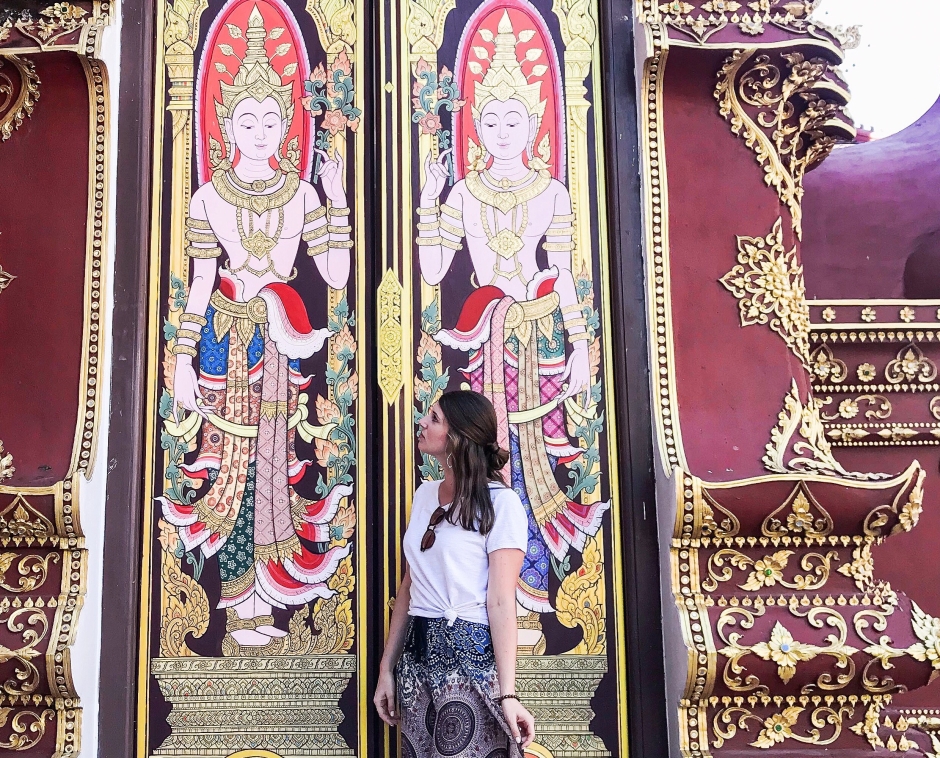 Located in the ‘Land of Smiles’ is Chiang Mai, Thailand – a city rich in culture and beauty. It’s filled with hundreds of temples, khao soi, and local markets. The main thing I wish I would have done differently in regards to my time here was to stay longer. There are numerous things to do in and around the city, but here are some things I did during my time here:

Chiang Mai is comprised of over 300 temples, which makes it hard to figure out which ones to go to in such a short time. My friends and I followed the map of temples from Big Boy Travel’s website, who narrowed it down to the ones that are a must-see (link to the website is below). We probably went to around 10-15 temples during our visit. My favorite was Wat Chedi Luang, which is the oldest temple in Chiang Mai. It does cost a small amount to get in, but it’s totally worth it. It’s breath-taking and full of history. Other notable temples are Wat Phra Singh and Wat Sri Suphan. Wat Sri Suphan is made entirely out of silver, but unfortunately if you’re a woman you cannot go inside.

Bua Tong Waterfalls (also known as ‘Sticky Waterfalls’) has a lot of hit or miss reviews, but it’s a total hit in my opinion. Something in the water makes the rocks rough rather than slick, so you are able to climb up and down the waterfall. After you finish climbing, you can chill out in one of the pools of water or grab a bite to eat at a food shop.

My friends and I left central Chiang Mai for a day to stay at an elephant camp called Chai Lai Orchid. They have a great program when it comes to anti-trafficking, where they help and empower women. The cottage I stayed in was beyond adorable and the food was delicious. The people who work there are also super sweet and accommodating. Although I had a good time with the elephants and am convinced that they are just oversized puppies, the elephant camp was not how it was advertised. Their treatment of the elephants was also very questionable.

For starters, we had paid for a mud-bath tour, but it ended up being just us with two elephants in the river for 20 minutes pouring water and sand on them. The entire time the workers were giving the elephants and us instructions on what to do, so we were not able to just freely play with them. It was also advertised that the elephants were rescued, but we found out that they had always lived on this land (previously used for work). When we asked the workers which ones were male and female, we were told there were no males at the camp because their hormones make them too crazy. We later found out this was a lie, as there were two male elephants at the camp. One morning we were getting ready to leave, when we heard a loud elephant cry. Another guest we had made friends with showed us a video she had taken of a male elephant located near the back of the camp, with his two front legs chained together (the source of the cry). She informed us that he had been like this for at least a few days.

Like I said previously, not all of my experience here was negative, but I would not step foot in this camp again. I wish I had done better research before I stayed here, but it is all a learning experience. My hopes for this honest review is that others will be better informed and make a wiser decision than I had. There are many legit elephant sanctuaries in Thailand who rescue abused elephants and conduct their businesses ethically, that I’d love to check out in the future.

Doi Inthanon is famously known for being the highest point in Thailand. We hired a songthaew driver to take us to all of the places we wanted to go throughout the national park. We went on a two-hour hike through the park (guided), where the views were beautiful. There are longer hikes you can go on, but we opted for the shortest one as we had limited time. Afterwards, we took a visit to the king and queen pagodas. Some other things we did on our visit was go to the waterfall, get lunch, and shop at a small outdoor market.

There are two main massage chains (from what I can tell) in Chiang Mai that hire solely ex-inmates. This is a way to give women a job and second chance once they are released from prison. We went to Lila Thai Massage. It was a really cool experience and the women who work there were amazing. I would highly suggest checking Lila Thai out, as it is a great program.

Okay, this was my favorite experience from my Thailand trip. Traditional Sak Yant tattoos have evidence of being around since the 9th century. Historically, Buddhist monks would tattoo these magical markings onto warriors to bring them protection in battle. Although Sak Yant tattoos have been around for hundreds of years, they really gained popularity among westerners after Angelina Jolie got one during her visit to Thailand. There are various designs, each offering different powers or effects, but all are tapped into the skin by either a large steel tip rod or bamboo needle. They are given and blessed by Buddhist monks or Ajarns (non-practicing monks).

I went to Ajarn Sam at Sak Yant Chiang Mai to get my traditional Sak Yant tattoo. He was a monk for 5 years and has been an ajarn for the past 2. Ajarn Sam blew my expectations out of the water, to say the least. All he did was draw a single line on my arm and then free handed the rest.I chose the style of Sak Yant that I liked best and personalized the powers I wanted it to bring into my life. I had it blessed to bring forth contentment, mindfulness, and growth. At each end starts a spiral, which signifies the many earthly distractions we encounter. As we grow older and wiser, the spiral gradually decreases into a line pointing upward. This line signifies the path to true enlightenment.

I stayed at Sri Chiang Yeun House and it was one of the cutest hotels I’ve been to yet. It had a very calming vibe and the staff was amazing. They were always accommodating, helpful, and warm to us. You can also come down and sit on their cute patio to enjoy a complimentary breakfast when you wake up.

If you have any questions about my trip to Thailand or life abroad, please feel free to contact me!